The following is a summary of global temperature conditions in Berkeley Earth’s analysis of April of 2020.

Globally, April 2020 is estimated to have been the warmest April since records began in 1850, exceeding the previously warmest year in 2016.

Temperature anomalies in April 2020 were somewhat warmer than those in March, and slightly warmer than January and February. The measurement uncertainty on the April average overlaps with that from several other months; however, April nominally had the 4th largest temperature anomaly yet observed. It is only exceeded by the January, February, and March anomalies from 2016, when temperatures were boosted by a very large El Niño event. This year, no El Niño is present, and the central Pacific is currently exhibiting neutral conditions.

The conditions in Asia during January to April 2020 warrant special consideration. In Russia, a new record average for this period was set by more than 1.7 °C (3.1 °F) above the previous 2017 record, and 6.0 °C (10.8 °F) above the 1951-1980 average. This prolonged heat has already contributed to large early-season wildfires, and may accelerate the loss of permafrost.

Of the first four months of 2020, only April has set a new record, though January to March were each no lower that fourth. Overall, the January to April average has been the 2nd warmest. The warmest January to April period occurred in 2016 and coincided with a massive El Niño event. It is remarkable that 2020 is approaching the same level of warmth despite the lack of El Niño conditions this year.

As noted above, the start of 2020 has been extremely warm. We expect some regression towards the long-term average during the rest of the year, which is important in the context of estimating the likely range for final temperature anomalies in 2020.

However, it is also significant that April did not yet show signs of relative cooling, and actually moved very slightly higher than previous months. This lack of the anticipated cooling has led to a significant upward revision for the likely annual average compared to the statistical projection made following March.

The statistical approach that we use now believes that 2020 has slightly better than even odds of surpassing 2016 and becoming the warmest year that has been directly measured. It is near certain that 2020 will be one of the 3 warmest years since 1850.

However, we should also note that the odds of a La Niña developing before the end of the year have been increasing. If La Niña does occur, it will presumably push global temperatures towards the lower portion of the projected range.

As noted above, the current projection for 2020 has shifted significantly higher than previous projections. The resulting ~60% chance of a new record is similar to projections that others have issued for 2020. 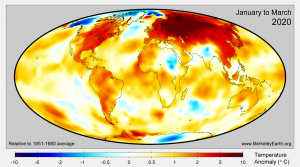