The following is a summary of global temperature conditions in Berkeley Earth’s analysis of June 2020.

Globally, June 2020 is estimated to have been the warmest June since records began in 1850, exceeding the previously warmest year in 2019. However, the margin of difference between 2020 and 2019 is small compared to the estimated uncertainties. As a result June 2020 and June 2019 may be regarded as essentially tied for the warmest June. 2020 has also had both the warmest April & May.

June 2020 continues the ongoing pattern of wide-spread warmth. Very warm conditions were present in parts of Asia, South America, Africa, and much of Antarctica. In particular, June continued an ongoing pattern of extreme warmth near the Arctic Ocean coast of Northern Asia.

The development of a cool area in the Eastern Pacific is indicative of a transition towards La Niña conditions.

June 2020 is notable for a transition towards La Niña conditions in the Pacific Ocean. This weather phenomenon is characterized by the emergence of relatively cool ocean water in the Eastern Central Pacific and would be expected to have a significant impact on global weather patterns over the next several months. The central Pacific remains in a transitional state, but a La Niña pattern is now considered to be favored in coming months.

In addition, the January to June averages for Asia, Europe, and South America all set record highs.

Looking at regions where January to June temperature averages were either the top 5 warmest or the top 5 coldest observed, we note extensive regions with record or near-record warmth during the first half of the year and no regions of near-record cold.

The extensive, extreme warmth over Asia is especially noteworthy. The January to June temperature anomaly in the Siberian Federal District of Russia was more than 6 °C (11 °F) above the long-term average. This exceeds the previous record by more than 2 °C (3.5 °F). This an unprecedented 6-month heatwave. It was recently estimated that this warm period would be nearly impossible without the impact of global warming, and even with the impact of climate change remains a highly unlikely event.

Of the first six months of 2020, April, May, and June have each set a new record, while January to March were each no lower than the fourth warmest. Overall, the January to June average is essentially tied with 2016 as the warmest start to a year. In 2016 temperatures were boosted due to a massive El Niño event. It is remarkable that 2020 is approaching the same level of warmth despite the lack of El Niño conditions this year.

The statistical approach that we use now believes that 2020 has an 45% likelihood of surpassing 2016 and becoming the warmest year that has been directly measured. This is a sharp departure from the previous forecast that placed the odds of a new record at 89%. We believe this decrease in likelihood is primarily related to the emerging La Niña, though we are surprised by the magnitude of this change and intend to investigate it further.

Likelihood of final 2020 ranking, based on January to June:

Revision to prior months

Finally, we wish to make note of an unusually large retroactive change to previous temperature estimates. In performing temperature field reconstructions, we aim to use all available data; however, weather data from some stations is not immediately available. This routinely results in retrospective adjustments to prior months. Usually such adjustments are quite small and/or localized, and have essentially no impact on the global mean.

With this most recent update the incorporation of delayed data has had a larger the typical impact on temperature estimates. In particular, additional data from sparsely sampled areas in Greenland, the Asian Arctic, and South America led to -0.04 °C revision the global mean for January to May 2020. This value is less than our stated uncertainties, but still unusually large for a change resulting from the addition of delayed data. 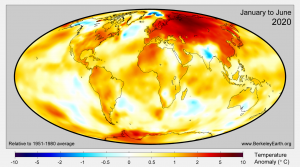