2016 was the warmest year since humans began keeping records, by a wide margin. Global average temperatures were extremely hot in the first few months of the year, pushed up by a large El Nino event. Global surface temperatures dropped in the second half of 2016, yet still show a continuation of global warming. The global warming “pause”, which Berkeley Earth had always stressed was not statistically significant, now appears clearly to have been a temporary fluctuation. 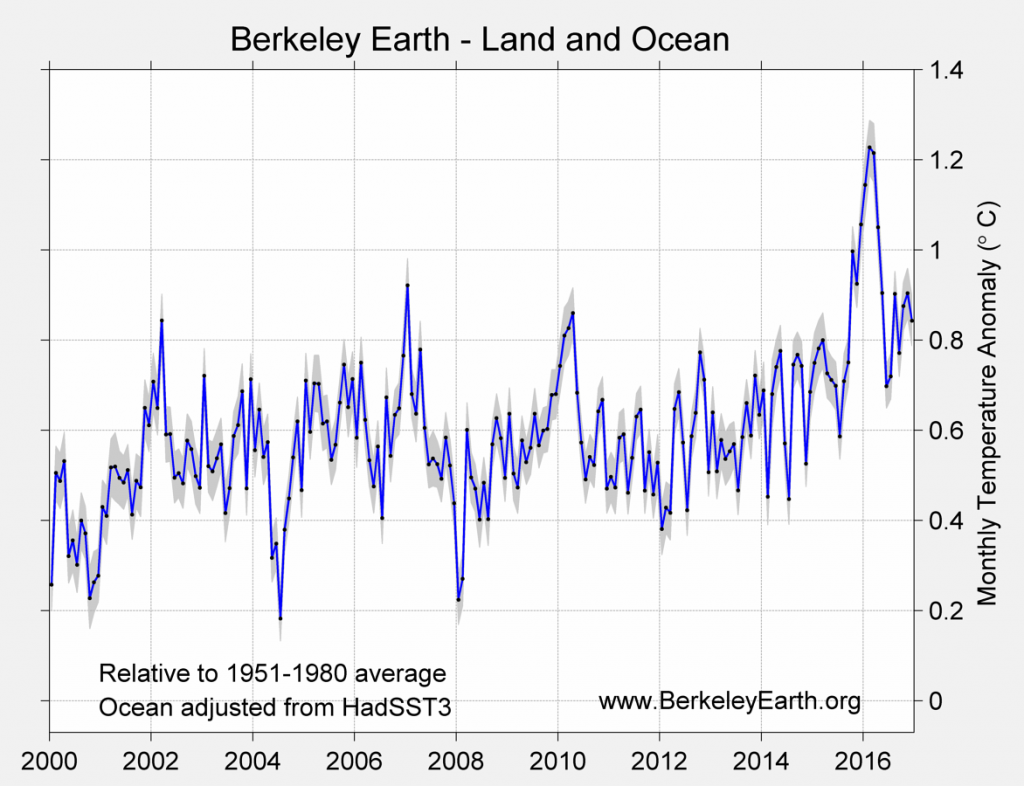 Robert Rohde, Lead Scientist with Berkeley Earth, said “The record temperature in 2016 appears to come from a strong El Nino imposed on top of a long-term global warming trend that continues unabated.”

In addition, 2016 witnessed extraordinary warming in the Arctic. The way that temperatures are interpolated over the Arctic is now having a significant impact on global temperature measurements. Zeke Hausfather, Scientist at Berkeley Earth said, “The difference between 2015 and 2016 global temperatures is much larger in the Berkeley record than in records from NOAA or the UK’s Hadley Centre, since they do not include the Arctic Ocean and we do. The arctic has seen record warmth in the past few months, and excluding it leads to a notable underestimate of recent warming globally.”

Elizabeth Muller, Executive Director of Berkeley Earth, said, “We have compelling scientific evidence that global warming is real and human caused, but much of what is reported as ‘climate change’ is exaggerated. Headlines that claim storms, droughts, floods, and temperature variability are increasing, are not based on normal scientific standards. We are likely to know better in the upcoming decades, but for now, the results that are most solidly established are that the temperature is increasing and that the increase is caused by human greenhouse emissions. It is certainly true that the impacts of global warming are still too subtle for most people to notice in their everyday lives.”

Richard Muller, Scientific Director of Berkeley Earth, said: “We project that continued global warming will lead us to an average temperature not yet experienced by civilization. It would be wise to slow or halt this rise. The most effective and economic approach would be to encourage nuclear power, substitution of natural gas for future coal plants, and continued improvement of energy efficiency.”

Additional figures on Berkeley Earth’s 2016 temperature results are available at www.BerkeleyEarth.org (click on banner at the top of the page).