While Berkley Earth’s surface temperature record has been publicly available for a number of years, the detailed methodology behind our dataset has been formally published for the first time by Berkeley Earth Climate Scientists Dr. Robert Rohde and Dr. Zeke Hausfather.

The process of putting together a global temperature record requires significant interpretation, and different statistical adjustments of the raw data can lead to significant differences in overall warming trends.

To this end, the paper specifically includes detailed discussion of Berkeley Earth’s treatment of areas with sea ice coverage: given the nature of the rapid warming taking place in the Arctic, differences in how to assess temperatures in areas of sea ice have led to significant anomalies in overall global warming trends. Accounting for this rapid warming in the Arctic suggests -0.1°C additional warming globally since the 19th century over models that do not.

The paper thus includes two distinct versions of the record; one treating areas with sea ice as air temperature over sea ice, and a second version treating these areas as sea surface temperature under sea ice.

The graphic above illustrates the comparison between warming trends demonstrated by Berkeley Earth’s global temperature dataset and those of four other global surface temperature research groups. As this paper was published prior to the release of the recent HadCRUT5 update, it does not reflect the updates in the newly released dataset reflecting slightly faster warming in HadCRUT5 vs. the HadCRUT4 record used in this paper.

The full text of the paper published in Earth System Science Data can be found here. 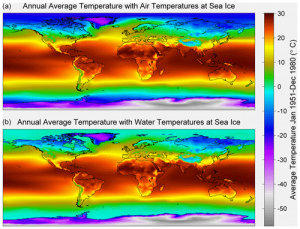