Beginning on June 26th, and lasting for the better part of a week, a massive “heat dome” settled across the Pacific Northwest, creating some of the most extreme heat conditions ever observed in North America. With record-setting temperatures upwards of 40 degrees Celsius above average, this heatwave generated significant global media coverage.

Below, Berkeley Earth has compiled seven resources to help put the magnitude of this historic heat event into context.

2. This was one of the most severe summer heatwaves ever on record for anywhere in North America.

3. Berkeley Earth’s Surface Temperature data set (BEST) allows you to visualize and download recent and historic temperature trends in many of the locations affected by June’s heatwave.

Many of the affected regions have warmed by about ~1.1 °C (2.0 °F) since 1950. This is somewhat less than the average amount of warming on land over this time.

Click the links below to navigate to each location’s dedicated data page:

This rate of warming is less than the average rate of summer time warming over land. Nonetheless, it is still sufficient to expect an increased incident of hot weather and more record high temperatures.

5. Yes, extreme heat events can be attributed to global warming and climate change.

Carbon Brief has put together this article, and this interactive map explaining how climate scientists determine whether extreme weather events are related to climate change or fall within the range of expected variance.

6. Overall, 2021 is shaping up to be a much cooler year than 2020; however, significant regional variations still remain.

After a record-tying 2020, the first four months of 2021 have been marked by the cooling effects of a now-weakening La Nina pattern in the Pacific Ocean; 2021 is projected to be around the 7th warmest year on record based on temperatures reported through April. However, significant regional variations remain, and areas of the Arctic, Asia, and the Middle East all saw significant warmth in the month of April.

7. You can read more about this week’s historic “heat dome” in Berkeley Earth’s recent media coverage.

Additional comment and insight from Berkeley Earth climate scientists Dr. Robert Rohde and Dr. Zeke Hausfather regarding this historic heat event is available via the links below.

Climate change may cause historic heatwaves more often than once every 1,000 years, experts say – via ABC News

First thing: officials warn historic heatwave in North America is just the beginning – via The Guardian

‘Hard to comprehend’: experts react to 121 degrees in Canada – via The Washington Post 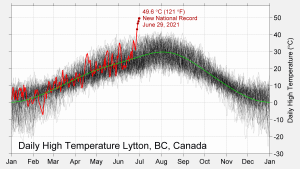